What can one say. When my boys were young one of them wisely opined that "no one wins an internet argument."  So true.

There is a pithy old saw I enjoy  -"maintain your dignity so you can help others maintain theirs." Too bad I'm not better at applying it.

I treat twitter as a form of virtual ephemera. I don't mean that it has a short life  (becuase it does persist like scotch broom: beautiful, but noxious). Rather, it has a moment in a flow of events and other trivia. I find it's impact useful in a particular moment, side commentary on public events, brief conversations with others, at times tussles over ideas or perspectives, sometimes informative, but most often tendentious.

I've had some excruciating experiences; like the time I tweeted out about a Drake lipsync sponsored by the AMS. 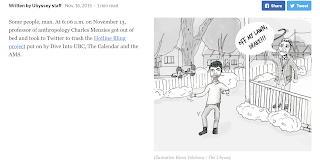 I kinda got a kick out of it. But, not until I had blocked what seemed like thousands of aggressive trolls (I am sure their parents love them just the same . . .).   I had sent off a tweet about the "sorry state of student politics" and then left for my morning run. By the time I came back my twitter feed had exploded. 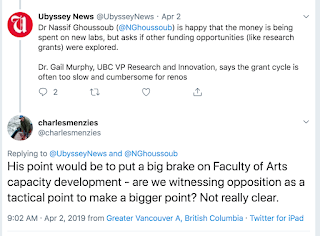 The tweets to the left are from the #UBCBoG committee meeting of April 2, 2019. The item under discussion was Board 3 approval of the final funding release of 6.6 million dollars for the 7.6 million dollar Douglas T. Kenny Building 4th floor renovation.

Most of the questions were fairly pro-forma.

My fellow faculty member Nassif Ghoussoub closed the question period on the item with a range of questions that I understood to suggest that the faculty of arts had not fully capitalized upon external funding opportunities. It certainly seemed that if the board was to make Board 3 approval contingent upon applying for external government, or other kinds of funding, that the effect would be to put a brake on the renovations. I wondered about the tactical value of focussing on an apparent lack of external funds.

I added another tweet to the fray and then the vote was called and it passed unanimously.

Then things got interesting.  Turns out people do read twitter feeds.

Nassif asked to speak.  He then proceeded to say that a governor had tweeted an incorrect statement about him.  He didn't name names. But I knew he meant me.  As I recall it he wanted something set up to restrict governors to only tweeting the truth. At least that's what I think was the gist of what he said. There may have even been a mention of civility and respect tossed in. But, what I do recall most clearly was that he was very annoyed by my twitter commentary.

There were a lot of ways this could have gone. Frankly, I rather wished I'd just kept tweeting and stayed silent in the meeting. What I did do was to interject to say yes, it was me and that trying to silence my voice on twitter wasn't appropriate.  Perhaps I even implied it was heavy handed. This all  necessitated the chair bringing us to order and stating we'd deal with the matter in governance committee. I trust that by the time it makes it to the governance committee there is no ham-fisted attempt to regulate online commentary.  In fact I am unconvinced there needs to be any kind of policy. Most of the people around the table appear not to avail themselves of twitter and, as such, really have little first hand experience of the genre. Nonetheless, having in the past been genuinely maligned online and even receiving anonymous threats for my stance in support of Indigenous rights, I can appreciate that my colleague only wants to be as fairly presented online as he can be.

I'll be the first to accept that I could easily have misunderstood what Nassif was asking. For that I put out a tweet apologizing for misunderstanding and misrepresenting what he said.

I also made it clear (and reiterate it here) that silencing twitter discussions is not appropriate. Nor is it reasonable to assume that every commentator will interpret every speaker just as said speaker may wish to be interpreted and represented.

One of the reasons that I try to tweet out my own statements is I am not sure that the others (like the student press or those lurking on the margins) will do me justice in how they present my words. They may well misunderstand what I have said. I may not be as clear or as articulate as I may have wished. For these reasons I back up my comments through these blog posts, tweets, and other social media to try to make certain that my intentions and perspectives are clearly understood. Sometimes this will even involve critiquing other people's statements and perspectives.

I know first hand that some people don't like how they are presented or critiqued online and that they will do their best to silence any representation they don't like.  I try to be accurate. I won't guarantee that I will always get it right. Nor will I promise that everyone I interpret, comment on, or critique will like how I represent them or what I say about their actions/statements.   I will correct an error, delete a tweet, or offer an apology if it seems appropriate.  I consider all of this just part of the process of the online debate that is now a real part of our political life.

Valuing diversity of perspective means taking those views seriously. That means respecting those views enough to  engaging them, critique them, and even dissemble them. It also means expecting the same from those who disagree with oneself. Sometimes that can be a bit rough - especially if folks aren't accustomed to having their own voices questioned.  But, if we only want sugar coating then we should get UBC's PR department in to tweet the meetings.  If we are intersted in real, frank, honest, and authentic comments then let us get on with our work!

Posted by Charles Menzies at 3:50 PM