Online shaming has become a popular sport  -or, if you rather, tactic- for many across the political spectrum.  The effects can be devastating for the objects of this tactic.  What I am intersted in here is how shaming is used strategically by political groups and movements to disrupt the operations of other organizations,  to undermine individuals perceived as opponents, and to police group members to ensure adherence to the group identity.  Previously I've posted about the tactics of silencing and it's intersection with issues of freedom of expression. Here I am more intersted in shaming and confession as an across the political spectrum tactic.

I recently came across a book about the Communist Party of China's (CPC) technique of suku - (Social Suffering and Political Confession: Suku in Modern China, by Feiyu Sun).    Suku was a political performance used to elicit support and discipline opponents of the Communist Party.  As Feiyu Sun 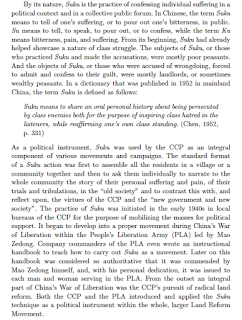 describes it a poor peasant or worker would speak before a community crowd outlining the trauma they had experienced and the harm that had been caused by an intellectual, a leader, or a political opponent. It had the appearance of being spontaneous, but it was performative and carefully scripted. A successful session ended with the accused publicly confessing for the harm they had inflicted upon the oppressed peasant or worker.

Feiyu Sun places this tactic of control into its specific Chinese and historical context.  His book, based on a dissertation completed at York University, draws upon the Frankfurt School (a type of marxist cultural theory) to explicate the role of suffering and confession in transitioning Chinese identities/subjectivities into the modern era.  There is much to commend the book but what draws me to it is the explication of the role of suffering and confession in compelling both belonging  and the personal deconstruction of opponents.  There is much here that mirrors the current practices of the politics of shaming -'call out culture'- of our current mode of popular politics.

From big names to those on the margins, being called out to confess crimes that have caused harm and trauma are legion on facebook and twitter. People end up losing their jobs, get ostracized, and often face a barrage of social media invective. Once all the sentiments of self righteousness and the unseemly pleasure many participants seem to take from calling other people is pushed away, we are left with something that looks very much like the CPC's tactic of suku.

Most online shaming tends to be focussed on a set of middle of the road liberal -intersectional- values centered on ideals of tolerance and acceptance of human diversity and difference. One popular meme is the Karen who is portrayed as a white middle class women who becomes unreasonably angry with a person of colour and make various threats such as calling the police, speaking to a manger, or threatening direct physical harm. While the meme presents the Karen as the aggressor acting from a position of privilege and power, most of the examples of real life Karens that I have been able to track down reveal that such people more often than not end up losing their jobs; jobs that are just as likely to be working class as middle-class professional.  The Karens will often issue abject apologies for causing harm (after being fired).  Their former employers and, sometimes, their former friends, make statements saying things like "Karen's actions do not represent our values and principles and such actions have no place in our community and where it is found, there must be accountability." In some cases the Karens' acts have indeed been egregious.  But in so many cases the acts they perpetrated are merely unkind and inappropriate, not acts of trauma inducing harm.

Conservative activists have run campaigns outing 'left-wing' profs. The Globe and Mail reports on one incident at York University.  Here conservative party activists were calling out left wing professors for indoctrinating students. In response, one York faculty member said “Faculty at York represent a diversity of viewpoints and perspectives just as we represent a diversity of fields and disciplines, from arts to administration, ballet to business.  Do they think we all think the same way? I really don’t like it when people try to incite students to be hostile or suspicious of their faculty."  In the U.S.A. there have been more coordinated attempts to out, shame, and get faculty fired. Organizations like Professor Watchlist make it their job to identify 'left-wing' professors. They use online shaming tactics to harass faculty they disagree with.

Tactics deployed by conservative activists look no different from those being used by liberal intersectionalist activists. The objectives are the same - compel a target to recant their errors and mistakes, and -if their actions are considered egregious enough- to have their employment terminated or convince them to resign. No matter what the underlying political reason shamers are motivated by, the desired outcomes are the same and borrow heavily from the practice of Suku. The shamers will share expressions of the harm (on the one side expressed as 'indoctrination' on the other as 'trauma') the target has caused, they will issue a call for a public confession by the target of their wrong doing, and demand the target agrees to mend their ways. While political figures like Justin Trudeau or Donald Trump seem to navigate through these attempts at public shaming fairly easily, most regular folks do not.

If we, as a society, are serious about respecting a diversity of voices and perspectives it might be reasonable to find a better way to take down one's intellectual opponents than through online shaming.

Posted by Charles Menzies at 11:08 AM