On Tuesday, March  29, 2022, the joint committees met again to consider their action on the motion I had originally proposed for the March 16, 2022 meeting. 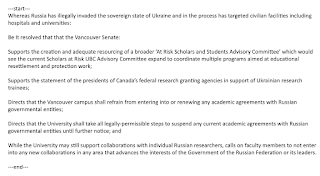 The committees decided to split the motion into two separate motions: one dealing with Russia specifically and the other calling for expanded support of the Scholars at Risk initiatives in view of the many ongoing conflicts around the world. The committees are still micro editing  the motions so no definitive version is available. Their intent is to submit a revised package of motions to agenda for Senate’s April 20 meeting.
Posted by Charles Menzies at 6:19 AM