Russia invaded the sovereign territory of Ukraine in between the February and March meetings of the UBC-V Senate. Given the urgency of the situation and the lack of decisive action on the part of UBC, I proposed a motion (at the March 16, 2022 meeting of senate) condemning the invasion and calling for a temporary end of all academic relations between UBC and Russian entities.  After a long debate the motion was referred to committee, essentially ending debate and introducing a potentially long period of deliberation before the motion might return (in some form) to the floor of the senate.  As a proponent of the motion I was invited to the joint committee meeting held to discus the motion on March 25, 2022). 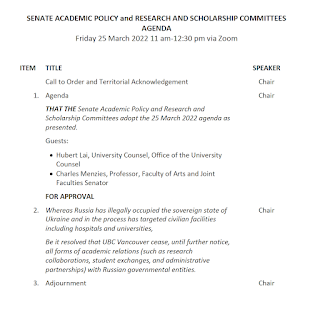 During the previous senate meeting (March 16, 2022), while a few senators spoke explicitly in favour of the motion, many expressed qualified support. Those in the latter category would begin by saying how they might support the motivation behind the motion, but that they took issue with how it might undermine academic freedom or directly effect individuals at UBC or in Russia. Others said there are many other acts of aggression by other states, why now, why in response to Russia's invasion of Ukraine?
As with many debates, a good number of senators spoke against things that weren't part of the motion. One senator said that Yeman had been bombed on February 24th. Another obliquely mentioned conflict in the middle east (implying since nothing was done about that, nothing should be done about this). Yet another mentioned internment of civilians during pervious wars. While all seemed to generally agree Russia's actions were problematic, they also seemed concerned that temporarily ending academic relations with Russian state entities was too harsh, unwarranted, and ultimately counter to a the ideals of liberal individualism.
One sole senator spoke up to point out that right now, as we speak, all Ukrainian research has stopped and that thousands (if not millions) of individual Ukrainians have had their lives forcibly disrupted. They also pointed out that yes indeed individuals at UBC will be affected by such a cessation of academic relations (I would note that not many formal agreements actually exist at UBC, and most of those that do have already been halted, and under UBC's student safety travel plans any travel to Russia and region is already not permitted).
So the motion was referred to committee by a vote of 33 to 21.  The majority of ex officio Deans, administrative leadership, and other appointed senators voted to defer. The majority of those who voted against deferring (and making a decision when it mattered) were elected faculty senators and some student senators.
At the open (though hard to access if one is not in the know or invited) joint senate committee meetings on Friday I was asked to offer my explanation as to why the motion should be adopted.  I have, like many of us, watched with shock the unwarranted Russian act of aggression and its impact on the people of Ukraine. I have seen the hard to comprehend warmongering of a country led by ruling class as notable for their super yachts as for their lack of concern with democracy. Along with many others I listened to newscasts itemizing the Russian military build up along their border with Ukraine, thinking they can't possibly be planning to use those troops. But they have. Then came the strong statements of outrage. But what is outrage without action?  UBC doesn't have a lot of sway in these matters, but it can lead by example. One example is to not reward a bully by ignoring the bully's acts of violence. Our own anti harassment and anti-bully policies at UBC are clear and punitive against bullying, harassment, and aggression. Why should we manage our academic relations otherwise? But, apparently when it comes to state bullying we use a different argument (note the continued existence of partnership agreements with Chinese and Hong Kong post secondary sectors, or honourary degrees to architects and managers of anti-Indigenous genocide, or research collaborations with universities in states already illegally occupying and subjugating other people and their lands). It has to stop. Isn't it time that UBC started applying its oft stated principles of global citizenship, empathy, and concern for social justice through meaningful actions?
The bulk of the speakers at the joint committee meeting who spoke were more interested in speaking about the faults and flaws with the motion, its omissions, it's knee jerk reactions, and its overreach.  In typical academic '2nd reviewer' fashion, senator followed senator calmly laying out all the faults but, with rare exception, providing no thought on what might be a better resolution in their mind (those rare exceptions were appreciated).  I guess it's important that we are all heard. Yet, hearing a dissertation on the ills of boycotts and sanctions, even if prefaced with a nice complement on my passion and intent, seems to miss the point: don't tell me what's wrong, tell me what works or what might work better. Or the intervention that talked about Afghanistan, women and the Taliban (which left out the fact that the problem was likely the result of legacy of a history of British, Soviet, and American imperialism). Then the, for me non sequitur argument that biodiversity collaboration with Russia might be disrupted - what? I really didn't get that one.
One speaker spoke about the immediate and individual effects the illegal invasion was having on graduate students they know. I too know of a student who has family in the Ukraine, they lost a family member early on during the illegal invasion. I confess to being more concerned about these individuals than a colleague who might have to forego a research collaboration right now, or an undergrad wanting a go global experience,  in order for UBC to take a more principled stand.
I am not certain what will be the outcome of this motion. I had to depart the meeting before they came to a resolution (and I don't believe they arrived at one before the meeting ended).  There is a draft resolution being prepared that will include elements of the 'whereas' statement I wrote while completely replacing the 'be it resolved' portion; simultaneously strengthening and narrowing the scope of that actions of the motion.  Once I know I can share that draft, I will (right now it's not clear that I can).
Posted by Charles Menzies at 7:44 AM