Charles was born in Prince Rupert, British Columbia, Canada in 1962. He is the eldest of three children of Shirley Marie Menzies (née Naud), an elementary school teacher, and Harry Basil [Basso] Menzies, who is a commercial fisherman.

Charles spent his summers fishing with his father on the family's commercial fishing boat from the age of 12 until he was hired at the University of British Columbia in 1996.  He earned the right to a full crew share seining salmon at the age of 15 and in the early 1980s earned the right to a full halibut crewshare. As a commercial fisherman Menzies fished halibut (longline), salmon (seine), and herring (seine) fisheries.

My term on UBC's Board of Governors began formally March 1. But this is the week the pedal hits the metal. Starting with a couple one-on-one meetings today with the president and the chair of the BoG I enter a two week period of formal BoG meetings. Many of them are closed, in camera, or confidential in some manner or other.

Along with the majority of my colleagues last year I lost confidence in the Board.  Two thirds of faculty voted for a non confidence motion of the BoG. The BoG's descent into a spiral of closed door, in camera, off book, and poorly documented meetings caused us to worry that the best interests of our public university was not being served.  Following last year's vote statements were made saying that clarity and improvement would come.  What's actually happened?

Following faculty's vote of no confidence in the UBC BoG the Office of the University Counsel started a policy review process that resulted in a draft revised policy being presented to UBC's BoG in September 2016. This document was then presented for consultation to the wider UBC community and revisions (such as they were) were brought to the February 2017 UBC BoG Governance committee which ultimately decided to recommend the Board defer a decision to implement until a review and discussions with a private consulting firm. 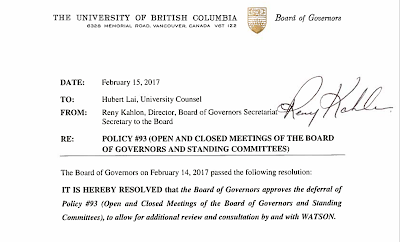 It is true that large institutions move slowly. It is equally true that important changes require careful consideration. It is always useful to ask experts what they think. Yet at the end of the day one is left with a uneasy feeling that we are turning into that age old place that follows a denial:  delay and defer.

What is the deal with secrecy and the fear of publics that large institutions seem to be governed by? Is it a cultural thing? Is it structural? Is it some kind of psychological anxiety issue?  Having only just joined the Board I have no specific insights as to what is happening here that sets me apart from any of my fellow colleagues who share my concerns with the lack of transparency in governance at UBC. Like them I can only hope that things are going to improve and, as my term continues on the Board trust that I will be able to actively engage in ways that will push the 'innovation envelope' on open transparent democratic governance at UBC.  Based upon my experience with governance bodies connected to UBC and our community I can offer some thoughts on why closed door meetings and off-book discussions contribute to a culture of anxiety, fear, and ultimately undermine principles of social justice and equity.

Having a broad definition of subjects suitable for closed door meetings seems to arise from a desire to control (1) access of information and, (2) actions of board members.

This has analogues in the business world and it's dealings with First Nations where Impact Benefit Agreements (IBA) are set up under extreme confidentiality provisions. Scholars examining these agreements note that confidentially clauses contribute to two situations. First, it undermines First Nations' leadership by lending the appearance of advancing their own self-interest. More importantly, it decisively slants the balance of advantage toward the industry proponents who control all of the information flow.

Closer to home the manner by which UBC administers its residential neighbourhoods also reveals some of the pitfalls of poorly defined procedures on what should constitute a closed meeting. Over the past couple of years UBC and the Province were in 'quiet' discussions about the fires services contract between the province and Vancouver. The details aren't relevant to this matter.  The long and short of it involved a download of costs of 1.5 million dollars from the province, to UBC, and then to residents living in UBC administration zone. UBC Admin got to a point where they figured they needed to bring in residential advisors.  They did so through the device of a closed meeting where even the agenda was not made public to most participants until the doors were closed.

Of course there are matters that require some degree of privacy and confidentiality - but they are truly rare matters.  It should not be normal procedures for matters to be placed in a closed agenda and a closed meeting.  There must be a clear procedures that defines what can or can't be done behind closed doors.  Most important there needs to be provisions that all actions taken behind closed doors be made publicly available in a reasonable period of time. The guiding principle should be stand in the sun for all to see. Without such open and democratic practices meeting rules become techniques to control information and to constrain participants, especially control over those who may hold dissenting perspectives.

I have already been surprised to be informed, in an orientation meeting, that if a matter is placed on a closed agenda one can not speak about it publicly, even if some of the materials are in fact in the public domain or even if one is already aware of the matter through a mechanism that was not a closed door meeting.  I can't believe or accept that such an interpretation is right - even if it may be procedurally correct.

Public institutions like UBC should lead, not follow, when it comes to open transparent democratic governance procedures.  Let's create a democratic innovation ecosystem! What is there to fear from public scrutiny in governance?  Ultimately nothing unless one has something to hide.
Posted by Charles Menzies at 9:22 AM No comments: