UBC has been faced with serious issues of late regarding infringements of faculty academic freedom. The situation became so dire that a special senior advisor to the provost, Neil Guppy (Professor, Sociology) was appointed in 2016.

The events leading up to Dr. Guppy's appointment have been well documented elsewhere.  By way of summary they began with the infringement of the academic freedom of business faculty professor, Jennifer Berdahl, by members of the UBC administration and Board of Governors.  This led to an independent study by the Honourable Lynn Smith, Q.C. and the subsequent resignation of John Montalbano, the former Chair of the UBC Board of Governors. 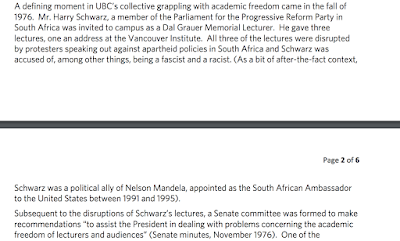 In the briefing paper  Dr. Guppy focusses on the irony of the named speaker being called racist and fascist while he was in fact a law and order reformer. Dr. Guppy does not elaborate upon the matter but instead focusses on the fact a Senate committee was set up to make recommendations to the President. Left unsaid was the fallout whereby a member of the university community (Alan Soroka, a law librarian at the time) was first threatened with being fired and then faced a lesser form of discipline. 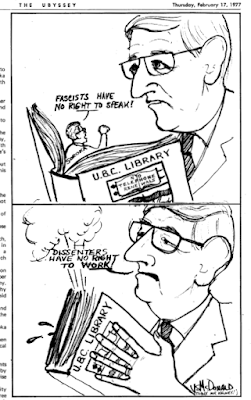 operating in a manner contrary to human rights provisions this moment in UBC's history also is about the rights of faculty and staff working at UBC to engage in acts of public protest and dissent. 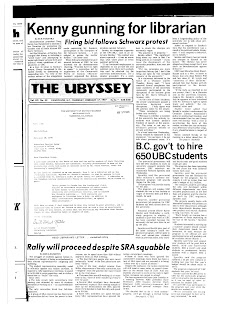 This is not simply an historical quibble. Across North American and Western European campuses we see a resurgence of these kinds of conflicts.  On campus groups invite speakers known for inflammatory rhetoric, questionable science, or just provocative enough to get a rise out of somebody. And somebody does get their back up. Protests are organized and a speaker here or there is disrupted.

The idea that all speech is equally valued and has a right to exist within a university is problematic at best.  That has never really been the case; it is unlikely that it ever will. Universities, according to the late Bill Reading (The University in Ruins) used be about managing national culture and through that mandate silenced dissenting faculty.  The modern university of excellence, says Readings, has shifted somewhat and has paid less attention to the content of faculty research but have paid attention to faculty criticisms of the administration.  Today's faculty member might not face sanction over published work, but they will be targeted for speaking out against the actions of their university administration or donors or business supporters. The fact is that the narrow domain of 'within the law' forms of Academic Freedom is that it allows problematic types of research while silencing political dissent critical of how the university operates.

Academic Freedom is in reality a small 'c' conservative policy. As it exists at UBC it is framed within the context of what is permissible under Canadian law.


"Central among these rights is the freedom, within the law, to pursue what seems to them as fruitful avenues of inquiry, to teach and to learn unhindered by external or non-academic constraints, and to engage in full and unrestricted consideration of any opinion." [emphasis added]

It is driven by an ideology of liberal individualism that prioritizes (with modest limits) the right of an individual.   All of this makes the doctrine of academic freedom of limited utility for those who try to use it to critique dominant political systems, university administrators, or to advocate for progressive social change.  It also would not protect a member of the university community from engaging in civil disobedience or even in acts of protest. We need a more aggressive, progressive approach that safeguards university faculty who have the courage of their convictions to stand up to administrators who pander to corporate interests.

Posted by Charles Menzies at 12:35 PM No comments:


Planning for UBC's newest residential neighbourhood is currently underway.  Stadium Place Neighbourhood is being designed to fund UBC Athletics Gameplan stadium rebuild.  Phase One of the Stadium Neighbourhood Planning Process is coming to a close.

Under phase one UBC planners have called for community input:


In this first phase of consultation, we will be seeking input from the entire campus community on living, working, studying and playing at UBC. Your experience can help us understand how this new neighbourhood can improve the campus experience of tomorrow. What we hear from you will guide our planning decisions.

The planners have been roving around campus with pop up booths, hosting workshops, and holding meetings with groups of concerned community members.  They've been doing a fairly intense outreach and publicity campaign seeking input.

Community input is being framed by a set of pre-existing guiding principles and the prior commitment that all revenue generated will go toward the Athletics' Gameplan.  If you haven't yet taken a chance to fill out the online survey (it's over October 22nd). Do so now! The 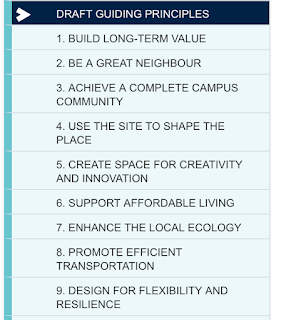 The draft guiding principles (see figure adjoining) are all quite nice.  They convey very positive values.  As of yet there are no clear explanations of how these principles will be operationalized - but to be fair, that is something that is hoped to emerge from the planning process as it itself develops.

To a great extent these are admirable principles.  Clearly most people want to encourage being "a great neighbour," support "creativity and innovation," or "support affordable housing."  These are important,  laudable principles.

In the context of the university's stated desire to fully and unconditionally support reconciliation efforts with First Nations it seems that the Stadium Neighbourhood planning process brings us to a place where the university could do more than offer ceremonial invocations or erect monumental works of art.  This is a chance for the university to put its money where it's heart and mouth is.

How might this work?  UBC has been using the revenue from land lease sales in the residential neighbourhoods to contribute to the university's endowment fund.   UBC created a private development company, UBC Properties Trust, to manage residential development and major on campus builds.   This has been a very successful venture, economically speaking, for UBC.


In the Stadium Place Neighbourhood land lease revenues have been committed to the Gameplan and the renewal of the current Thunderbird Stadium.  Maybe it's time to try something that might make a real difference. UBC could make a material commitment to back up its good rhetoric on First Nations reconciliation.

UBC could dedicate a minimum of 25% of the revenue from the sale of land leases for something such as a First Nations youth education fund.  As important as football and stadium sports are to UBC’s spirit building, making a material investment in First Nations education will have real, long term benefits for all British Columbians.

Doing something like this builds upon UBC's work in support of reconciliation and meeting the call to action from the Truth and Reconciliation Commission.  Imagine what a multi-million dollar endowment in support of First Nations' youth education could do for our city, our province, our country.  UBC consistently ranks in the top 50 research universities globally. UBC champions global citizenship.  UBC is a place of excellence.  Think what UBC has to offer First Nations youth for our collective future wellbeing!  Transforming the profits from Stadium Place into lasting legacy of educational opportunity is the perfect way for UBC to honour the reconciliation calls to action, to atone for the university's complicity in the residential school system, and to demonstrate in a concrete fashion UBC's words mean something serious.


Posted by Charles Menzies at 5:59 PM No comments: