Building a better future in the university

a partial manifesto for moving forward.

The struggle for social justice has no intrinsic direction. With every step forward we seem to find ourselves pushed back. In moments of success those who take advantage of the victories at times were those most silent during the struggle. Yet we can maintain hope that it is in the partial victories, the half steps, and the hesitant actions that foundations for fundamental change can be laid. This is a partial manifesto for a better future in the university.

A better future in the university places improvements for working people at the heart of the movement.

Workers, not customers, not donors, not managers, workers must be at the center of the movement for a better future.

A living wage for all workers is the principal upon which all compensation for labour in the university is to be based.  This means:

This builds and elaborates a set of comments I previously posted on twitter. 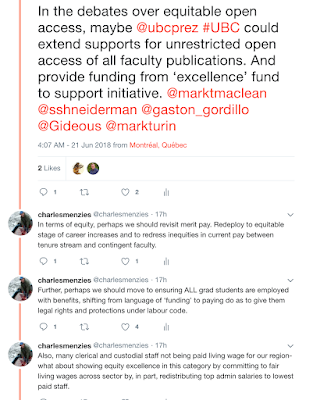 
Posted by Charles Menzies at 1:33 PM